Apprentice of the Year – Travis Jordan 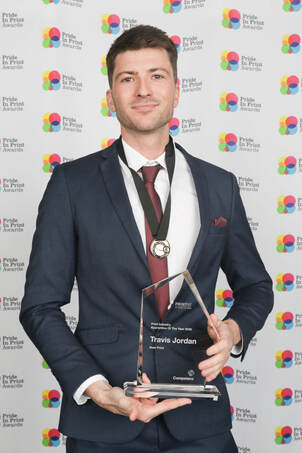 Apprentice of the Year

Bestowed Apprentice of the Year is “something I’ll happily carry with me throughout my career”, effuses Mr Jordan.

“To have this acknowledgment for the effort and time I put into my craft is really special and a reminder you get out what you put in,” he says.

“In my acceptance speech I mentioned I received so much incredible support from my family and those I’ve had the pleasure of working with. A few gentlemen who’ve been incredible mentors and whom I’ve learnt a lot from are Alex Huynh, Stephen Anderson, Brian Landry and Michael Petelo.”

Mr Jordan is appreciative of the “unconditional support” shown on his journey by family, friends and colleagues alike.

“I love the sense of respect we have for one another in the print industry – it’s surreal. We all share our tough days and our good days, and to be acknowledged by those close to me who understand the effort I’ve put in really does mean a great deal.”

He says the achievement is definitely a spur on to future goals.

“I’m really excited to continue to innovate and grow alongside the ever-evolving technology that we have up-and-coming within the industry. I think overall it spurs me to step out of my comfort zone, try something new, and give it a go.

“I’m very excited to see where the industry may take me. At Soar we’re looking at taking it a bit further. We like to see something new and challenging, and really show our existing and future clients what we’re capable of.”

Mr Jordan also acknowledges his fellow candidates for the Apprentice of the Year.
“They have also worked just as hard as I have to truly prove they’re the best at what they do. They’re the new leaders for our industry and they should be incredibly proud of what they’ve achieved so far in their careers.”

Soar Print managing director Fred Soar says it has been a pleasure to see Mr Jordan “develop and grow” throughout the apprenticeship.

“Even when he got up and spoke – the confidence and the maturity – it was really cool to see,” says Mr Soar.

“Travis started working for us on a casual basis and he’s someone we then approached and said ‘do you want to be an apprentice?’ We could see he was a pretty focused guy, a quick learner and had great mechanical aptitude.

“But I think initially we had to cajole him into it – he had other career aspirations. So, we had to show him it was a good trade and a nice place to work.

“He has now gone on to the next level. Effectively, he has become a trainer himself – he is training the younger apprentices for us!”

Training Company of the Year

Labelmakers administrator/manager Tracy Hislop and operations manager Rachel Wymer say being named Training Company of the Year rewards a “whole team effort” towards establishing training as a fundamental aspect of the firm’s practice.

“We are incredibly proud of this achievement and all of the work our team has put into training and development of our employees,” they say.

“We are excited to be recognised as Training Company of the Year in the print industry after some challenging years developing our training culture and programme.”

Ms Hislop and Ms Wymer say having also been a finalist last year, the entire Labelmakers Team was “thrilled” to share in “the part they had played in receiving this award”.

“We were congratulated on the night by the various suppliers that we caught up with at Pride In Print and they were absolutely delighted for us. We had some of our team members attend the awards and the opportunity to celebrate their hard work on the night has created excitement for our training plans for the year ahead.

“We look forward to building on what we have established as a training programme across the whole company to further develop our team and our business. We will continue to create and develop a culture of learning and development in our company and contribute to training across the wider industry.”

Trainer of the Year

Soar Print digital supervisor Alex Huynh humbly expresses it “never crossed my mind that I would win an award for sharing knowledge and experience I have learned from this industry”.

“It was an awesome feeling – I’m very honoured, excited, proud and grateful for the recognition,” he says.
“My family and colleagues were very proud of my achievement.”

Mr Huynh observes that successful teaching and training is “not just the trainer’s effort”.

“The receiving side also has to play their part and be diligent in their work and learning. I’m tremendously pleased with Travis and his performance, attitude and dedication throughout his apprenticeship. He has worked extremely hard and deserves to win his award.

“I would like to thank Fred, Jenny and Vicky Soar for the opportunity, Brian Landry and Stephen Andersen and my teams in the Digital Department and everyone at Soar Print – it is so nice to be working with such a team of excellent professionals.

“I would like to make special mention of Michael Petelo, the trainer before me, for laying such a solid foundation for Travis when he first started his apprenticeship. Thanks also to PrintNZ and Competenz.”

Mr Huynh says receiving the award has ignited a “renewed vigour to bestow upon the next round of apprentices”.

“This has also given me a personal boost of confidence to encourage me to look at further development within my career in the print industry.”

“Not everyone is the same, so you have to work out how you are going to communicate with the person,” says Mr Soar.

“He obviously also has great technical knowledge and he is just a great team player – he knows how to get the most out of his team.

“It is great to see Alex develop someone like Travis and mentor him and train him through. Currently we have another two apprentices underneath him and I’m really excited about that and pretty hopeful about their prospects.”

Reflecting with “immense pride” in his entire team, Mr Soar says the firm has received widespread congratulations for the achievements – including BJ Ball putting on “the best morning tea I’ve ever had” to celebrate with all staff.

“We were lucky enough to have three tables there on the night, we had a good portion of the staff there to support them and it was great to see it come off.

“We do have a focus on our training programme, it is definitely a concerted effort. Craft in pride is one of our values – anyone can go out and buy one of these fancy machines, but if you want to produce good work and make money off them, you really need to understand what you are doing across all parts of the process.

“Congratulations to both Alex and Travis – we are really proud of their achievements and we are lucky to have them as part of the Soar Family.”