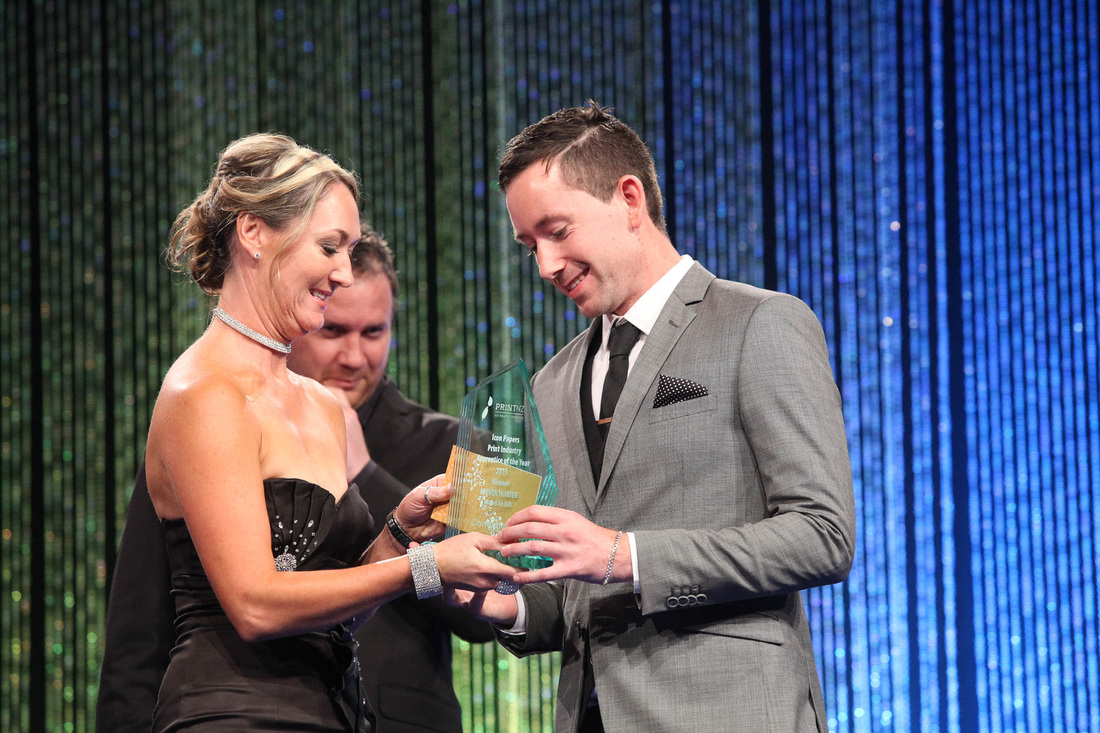 Having been offered a spare ticket to the 2012 event, Mr Hunter says the evening “took my breath away” and changed his focus from the industry providing him with just a job to a bona fide career.

“For the first time in my life I had a goal,” he says.

“Seeing the 2012 apprentices on stage opened my eyes and set in my mind that one day I would be there.

“My dream has become a reality. I now understand the phrase ‘anything is possible’ and, as the great 21st Century inspirational speaker Justin Bieber said, ‘never say never’.

“My new goal is a tad larger, to be back on stage receiving a print award that has been won by my very own business.”

Sealed Air New Zealand printing/laminates supervisor Damion Robinson says Mr Hunter, who had previously been with the company for three years in a less challenging role, has fully seized the opportunity.

“Steven has shown a really great work ethic,” he says.

“The three apprentices we have now want to know what the bar is that he set and where they have to go.

“Our type of business is very quality-focused, everything is always to the enth degree and that comes through in the training. Steven’s trainer, Wade Collins, has put a lot of time and effort into him.”

The official presentation of the Apprentice of the Year Award followed the naming of the finalists and presentation of other prestigious awards at a PrintNZ dinner held on May 22 at the Auckland Maritime Museum.

“I have met a lot of great people over the years and had mentors that have put time into me and it is only fair that I take their knowledge and reinvest it back in others,” he says.

“They have guided and challenged me, given me scope to grow as an individual and to try ideas and see where they can go.”

Mr Ertel concurred with a comment made on the night by CMITO general manager John Cudby that committing to apprentices provided a competitive “point of difference.”

“It keeps the standards up and keeps improving standards,” says Mr Ertel.

“It is an asset to have someone who has come through an apprenticeship and you can point to them and say ‘hey, these are my skilled staff’. As a business owner, I have always taken on apprentices -- there is nothing better than training them yourself.”

“I am proud to say I’ve just had two apprentices pass and have another five on the books all doing really well,” he says.

“When I came to this company, no staff were trained. In one of the departments, generally when someone left we would need to advertise and get someone in -- but one of the guys just left and we took another of the guys we’ve been training up and put him straight in. It is an awesome story.”

“We have just taken on another five apprentices, so we have a big commitment to the industry but we also want to know we are producing the best apprentices as well,” he says.

“That’s testimony to us having won three Apprentices of the Year and we’ll have another exciting candidate in next year’s awards. It’s about giving them the opportunity to improve and develop.”

In addition to being an Apprentice of the Year Finalist, Ms Sparrow says she was “blown away” to be named the winner of the GAPF Scholarship as the top Digital Processes for Print apprentice.

“I am a complete print nerd, so to win this is mind blowing and brilliant,” says Ms Sparrow.

“I think it becomes a passion when you can’t turn it off, it’s with you all the time -- it’s every billboard you see, every small sticker on a bumper when you’re stuck in traffic -- you start analysing going ‘that margin’s not big enough’ or ‘it’s trimmed terribly’.”

Ms Sparrow is considering spending her $2000 prize on an overseas research trip or a Print Management Apprenticeship.

Adhesif Labels’ Layton Armstrong was named the winner of the Jenkins Award for the top label printing apprentice.

“I love training and I love learning,” he says.

“I really enjoy being involved in a sector that is so innovative and forward-moving. It is exciting to see that I’m involved in something that has a future.

“There is a passion there and every day I know that when I turn up there is going to be something new to do. We are constantly learning and that’s a good thing.”